If we can’t learn from one another, what good is our existence? We understand their are adoptive parents and others who truly want to try to understand us better. As a way to assist them on learning how it feels to be adopted, I decided to ask one question to generate some responses.  Why are so many adoptees angry or hurt by their adoption experiences? These responses have been kept anonymous for confidentiality reasons. Each person that participated knew their response was going to be posted on a blog and shared with the world.

To my fellow adoptees, thank you for sharing such a personal piece of your hearts to help others understand us better. If we don’t who will? Also, remember you are never alone. The way you are feeling is natural for a not natural situation. Much love from me to you!<3

I asked one simple question, “WHY ARE YOU ANGRY?” 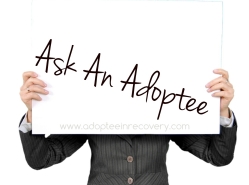 Here are their responses.

Can any adoptees relate to these posts?

Many Blessings to all, and thanks for reading!

Don’t forget this article along with all my other articles are available in audio for your convenience, just look up Pamela A. Karanova Podcast on Google Podcasts, iTunes , Spotify. and Amazon Music. Interested in treating me with a coffee, to add fuel to my fire? Click here. Many thanks in advance to my supporters!